Big and bold ideas to help make Brisbane even better 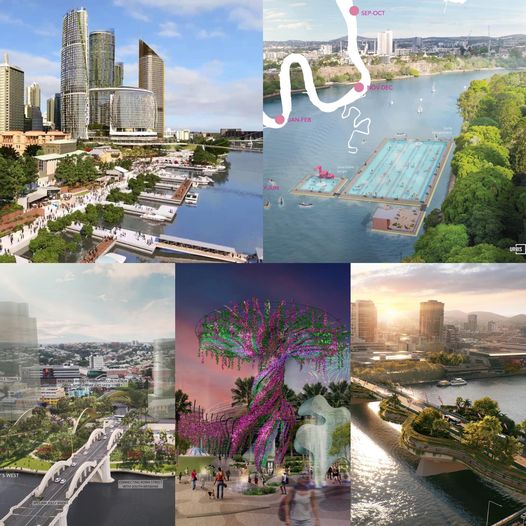 Big and bold ideas to revitalise and reimagine popular inner-city precincts ahead of the Brisbane2032 Olympic and Paralympic Games have been unveiled.

From removing the Riverside Expressway to creating a mobile Olympic-sized pool in the Brisbane River, more than 600 ideas have been generated during the initial stage of Brisbane City Council’s Inner Spark engagement process.

Lord Mayor Adrian Schrinner thanked the hundreds of Brisbane planners, designers, architects and students who have contributed ideas and encouraged residents to have their say on the many daring, audacious and innovative concepts.

“We asked some of Brisbane’s best and brightest to come forward with big and bold ideas that can transform those areas of our city that are popular with residents and visitors alike,” Cr Schrinner said.

“What we wanted were concepts of all shapes and sizes that can enhance the experience of visitors during the Brisbane2032 Games and remain as legacy infrastructure and experiences for residents into the future.

“Like Expo88 transformed the industrial site we now know as South Bank, we wanted to start a conversation on how Brisbane2032 can revolutionise other parts of our city, particularly those areas in and around Games venues.

“I’ve been blown away by what we received back. While I love some of the ideas that have come forward, I’ll admit there are others that I’m not so keen on. The important thing now is that we get feedback from Brisbane residents.

“Howard Smith Wharves, Albert Street Green Spine, Queens Wharf and our Green Bridge program have all come from similar public processes in the past.”

The ideas were submitted under seven guiding themes, including “connected”, “future-focussed” and “green”.

Deputy Mayor and Civic Cabinet Chair for Economic Development and the Brisbane 2032 Olympic and Paralympic Games Krista Adams said a series of workshops, pop-up engagement events and activations will now occur so residents can get involved.

“I’m sure these ideas will be the subject of much debate around the barbeques of Brisbane over coming weekends,” Cr Adams said.

“There will be lots of opinions about whether a sub-tropical garden on Victoria Bridge is a good idea or if it’s possible to widen the river edge to create water-side parklands and community spaces.

“However, we now need to hear people’s opinions directly as well as any further ideas.

“This is about the next phase of making Brisbane even better, ensuring Games spectators tell all their friends and family about the fantastic sub-tropical city that they discovered in Australia and, most importantly, leaving a lasting legacy for our residents.”