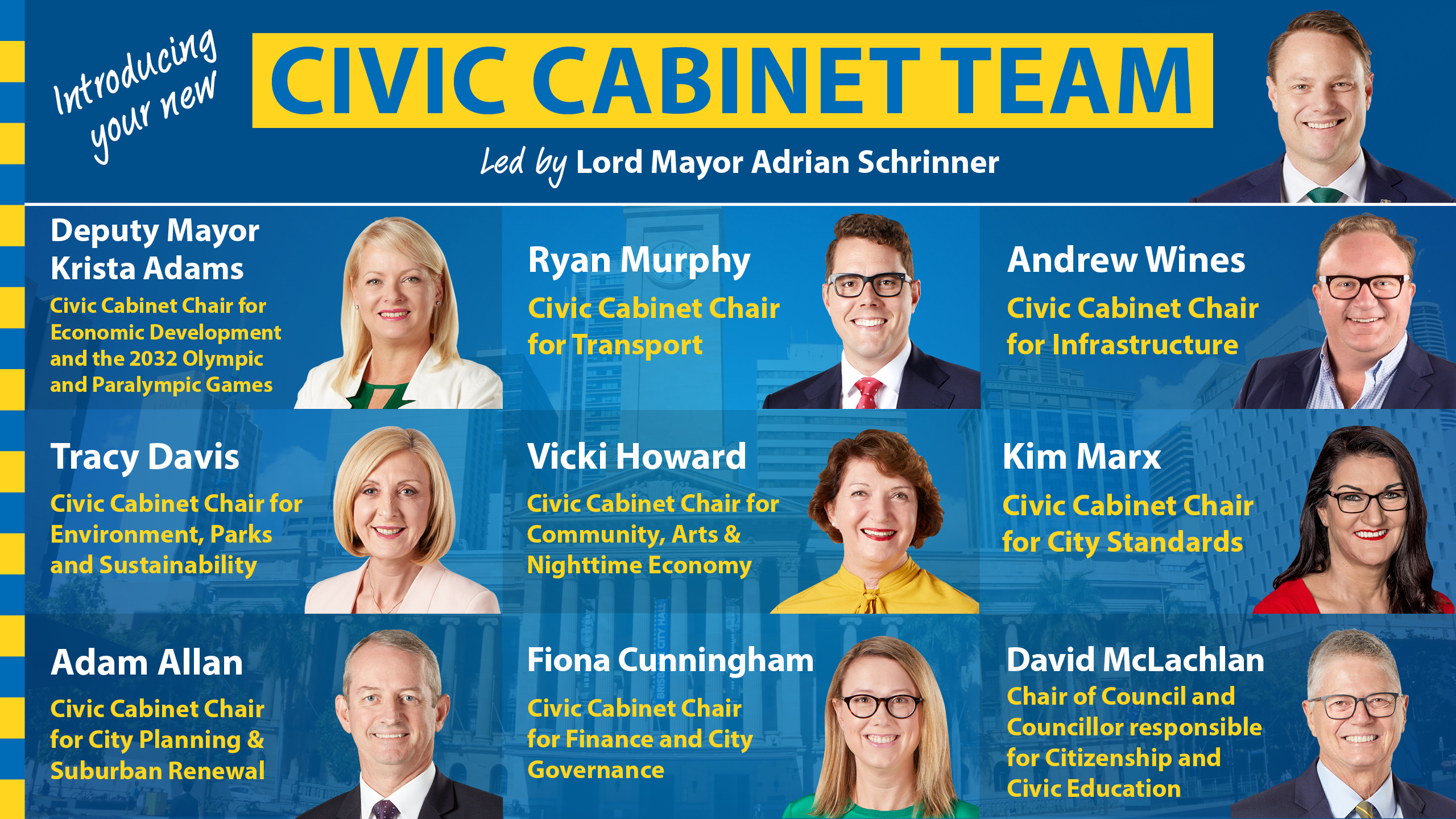 Lord Mayor Adrian Schrinner has unveiled his new Civic Cabinet team which will spearhead Brisbane’s journey towards becoming an Olympic and Paralympic Games city and continue the task of recovering from the COVID-19 pandemic.

The Lord Mayor said the expanded Civic Cabinet had the right mix of experience and new talent required to lead Australia’s biggest local government and take on the exciting job of ensuring Brisbane 2032 delivers a lasting legacy for residents.

“Brisbane is unique when it comes to local government in Australia,” Cr Schrinner said.

“Our population of more than 1.25 million means we’re twice the size of all other capital city councils in Sydney, Melbourne, Adelaide, Perth, Darwin and Hobart combined.

“Together, we also serve more people than the State of Tasmania, the Australian Capital Territory (ACT) and Northern Territory put together.

“With a Budget of $3.6 billion, our Civic Cabinet Chairs manage portfolios bigger than some ministers at other levels of government which means they play a vital role ensuring Brisbane runs smoothly.

“With the Olympic and Paralympic Games now firmly on our horizon, it is more important than ever that Brisbane has the best team in place to manage our city and ensure the right decisions are made to deliver a Games that leaves a positive legacy for residents.

“I’m confident this enthusiastic team can deliver that and I’m excited about working with them to make Brisbane even better.”

As revealed earlier this week, Deputy Mayor Krista Adams will take on the newly-created role of Civic Cabinet Chair for Economic Development and the 2032 Olympic & Paralympic Games with responsibility for Small Business and International Relations.

“Anyone who knows Krista will attest that she’s an avid sports fan and her experience managing some of Civic Cabinet’s most complex and challenging roles makes her the perfect choice to lead our Games responsibilities,” Cr Schrinner said.

“Along with guiding the delivery of important legacy projects such as South Bank 2.0, we will need to ensure Brisbane is up to the transport task and that all investments made in the Games deliver dividends for residents beyond 2032.

“After working with Cr Adams for many years, I’m confident she will excel at this new role.”

“As a former state government minister, Cr Davis will be a great addition to Civic Cabinet while Cr Wines is a very experienced councillor,” he said.

“I’m also proud that this means women will hold more than half the positions in our Civic Cabinet.

“We continue to lead the way in ensuring both our senior leaders and our wider team of councillors has unprecedented levels of female representation.”