Machines fire up to start works for Adelaide Street Tunnel 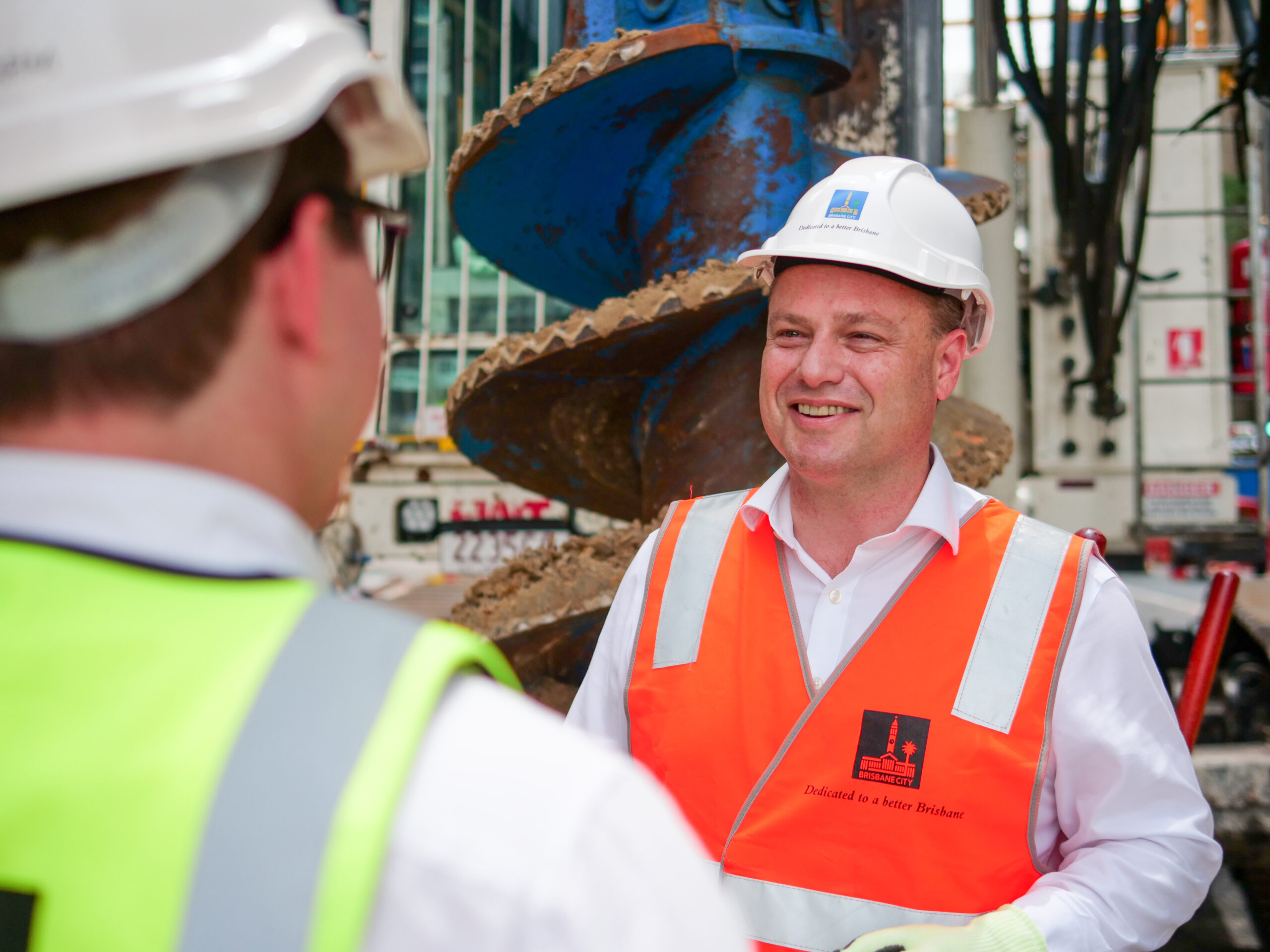 Australian-first construction techniques will be used to build a 200-metre tunnel in the heart of the city for the Brisbane Metro project, Lord Mayor Adrian Schrinner has revealed.

Cr Schrinner said specialised machinery had arrived on Adelaide Street to start building the tunnel which will link North Quay to the King George Square Bus Station when complete.

“The tunnel beneath Adelaide Street will unlock the city’s public transport network by providing a dedicated connection from the South East Busway to the Inner Northern Busway for Metro and bus services, along with creating a revitalised streetscape from North Quay to Edward Street as part of the Adelaide Street Vision,” Cr Schrinner said.

“Now that the machinery has arrived, our crews will complete 169 piles ranging from five to 13 metres in depth to build the tunnel portal structure which will enable tunnelling for the 200-metre tunnel beneath Adelaide Street.

“Once we complete the initial excavation works, we will move beneath the surface where we will use a special tunnelling technique to reduce surface impacts and ensure structural integrity.

“Australian-first construction techniques will be used throughout this project, including the use of a purpose-built drill rig that will drive canopy tubes into the earth, to protect the tunnel. These will then be filled with concrete to support the tunnel roof.
“There are not many tunnels like this around the world that are delivered in a built-up area like the Brisbane CBD, so it is an engineering feat for Brisbane.

“The tunnel will be a new chapter in the rich history of Adelaide Street, which originally served as a tram corridor through the CBD now being converted for Brisbane Metro.

“In 1923, the Council widened Adelaide Street by more than four metres along its entire length.

“Now, nearly a century on, we are undertaking another ground-breaking project to further increase the capacity of the popular commuter corridor.”

Civic Cabinet Chair for Transport Ryan Murphy said while the tunnel would be a significant engineering feat, the surface of Adelaide Street was not forgotten.

“These underground works will ensure that businesses at street level aren’t disrupted by noisy and dusty construction for the years it will take to build,” Cr Murphy said.

“The Schrinner Council is also delivering the Adelaide Street Vision which will include a new river viewing deck along North Quay providing a walkable, enhanced precinct to enjoy the great river views.

“No matter how you choose to travel, the Brisbane Metro and Adelaide Street Vision will provide a world-class transport experience for Brisbane residents and visitors.”

Federal Member for Brisbane Trevor Evans said it was exciting to reach the latest milestone for delivering this project, which will transform public transport in Brisbane.

“The Brisbane Metro is the next piece of our city’s transport jigsaw, tackling congestion in the CBD and slashing travel times for commuters. It’s a great example of the strong collaboration between the Schrinner Council and the Morrison Government,” Mr Evans said.