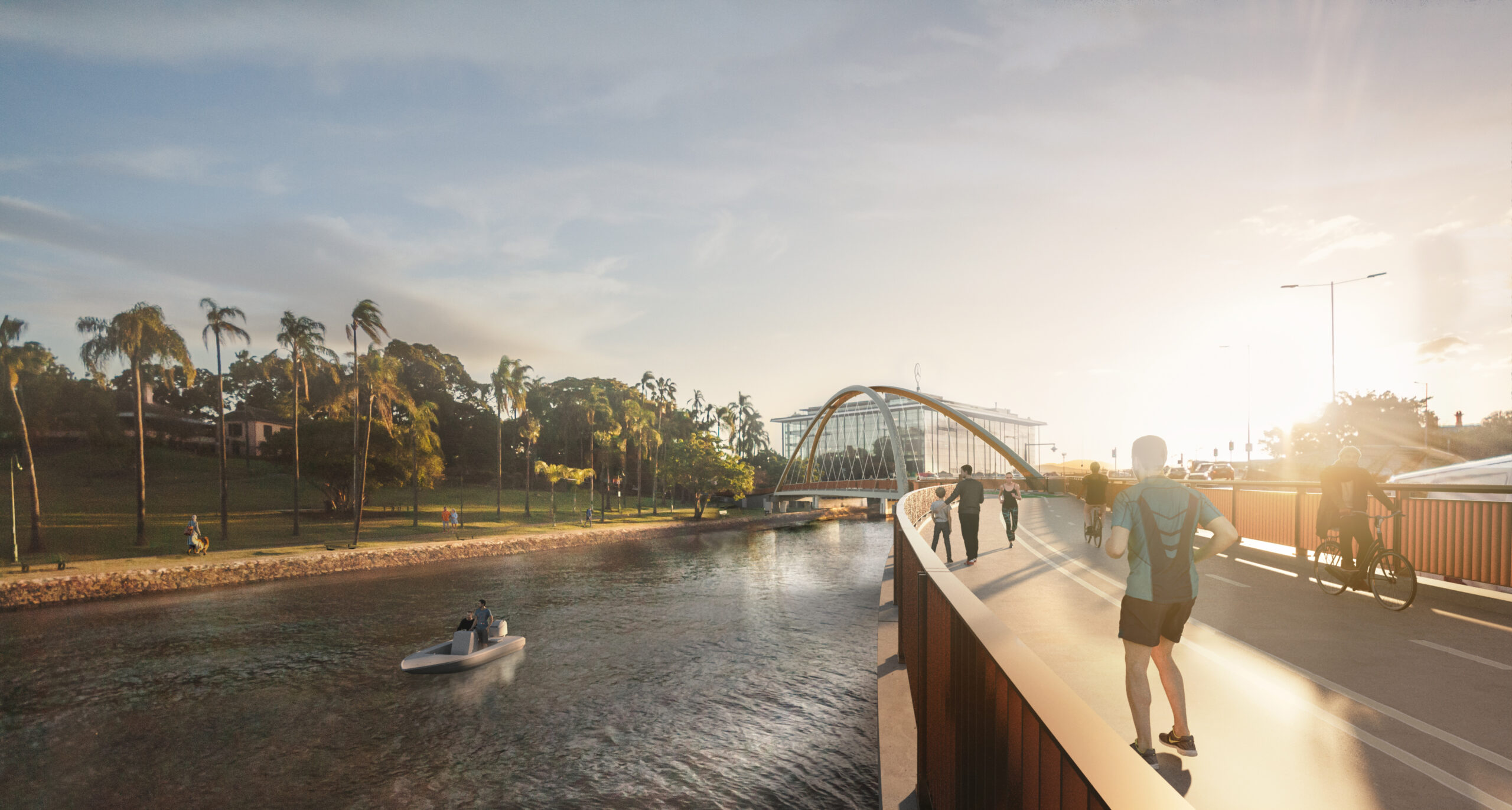 Work on Brisbane’s latest green bridge will begin soon after the contract to build the exciting new pedestrian link was awarded to a joint venture.

Lord Mayor Adrian Schrinner said the strikingly-designed Breakfast Creek Green Bridge will enhance access and safety between Albion and Newstead and play an important role during the Brisbane 2032 Olympic Games.

The awarding of the contract to a joint venture comprising civil contractor Georgiou Group and Brady Marine & Civil comes less than three months after work began on the much-anticipated Kangaroo Point Green Bridge.

“All the world’s great river cities also have great networks of bridges and that’s what we’re delivering for Brisbane with these great new bridges,” Cr Schrinner said.

“The Breakfast Creek Green Bridge is a missing piece in our transport network as it will seamlessly link the Lores Bonney Riverwalk along Kingsford Smith Drive to Newstead Park on Breakfast Creek Road.

“For pedestrians and cyclists who travel through this area, the Breakfast Creek Green Bridge will be a game-changer along this much-loved but busy stretch on the Brisbane River.”

Cr Schrinner said with the athletes’ village planned for Northshore Hamilton and the 12,000-seat basketball arena likely to be built at Albion, the Breakfast Creek Green Bridge will be a vital asset before, during and after the 2032 Games.

“Athletes and team officials from all over the world will use this bridge when the world’s biggest sporting event comes to Brisbane in a decades’ time,” he said.

“The Kangaroo Point Green Bridge, which is now part of the South East Queensland City Deal, will also play a similar role during the Games by linking a redeveloped Gabba Stadium with Brisbane’s city centre.

“Since Brisbane was named the 2032 host city I’ve said repeatedly that there’s no time to waste ensuring the Games leaves a last legacy and that’s exactly what my team is doing.”

The bridge is expected to be completed by early 2024.

The final design for the Breakfast Creek Bridge includes:
• an arch bridge span across Breakfast Creek with a length of approximately 80 metres
• extending the existing Lores Bonney Riverwalk by 175 metres from Cameron Rocks Reserve to the northern bridge abutment
• dedicated pathways for pedestrians and cyclists on the bridge deck and approach pathways, with a minimum width of six metres
• pause points at the southern and northern bridge abutments, providing an opportunity to enjoy views of Newstead House and the Brisbane River
• a high-quality landing point in Newstead Park with new signage, rest areas and drinking fountains
• integrated pathways and landscaping within Newstead Park and Cameron Rocks Reserve
• interpretive signage and feature lighting.

“These firms have more than 70 years combined experience delivering projects in Brisbane and the surrounding region, including the recently completed Indooroopilly Riverwalk which was completed ahead of schedule and under budget,” Cr Murphy said.

“Our Breakfast Creek Green Bridge project will source more than 90 per cent of supplies locally while create about 140 local jobs.”

Cr Murphy said the project will also include a new two-way on-road cycle path from the bridge landing at Newstead Park, along Breakfast Creek Road and Newstead Avenue, through to Newstead Terrace at Halford Street.

“This new ongoing cycle connection will provide a safe, separate ongoing connection to the inner city and CBD, and avoid the need for commuters and cyclists to travel through Newstead Park,” Cr Murphy said.