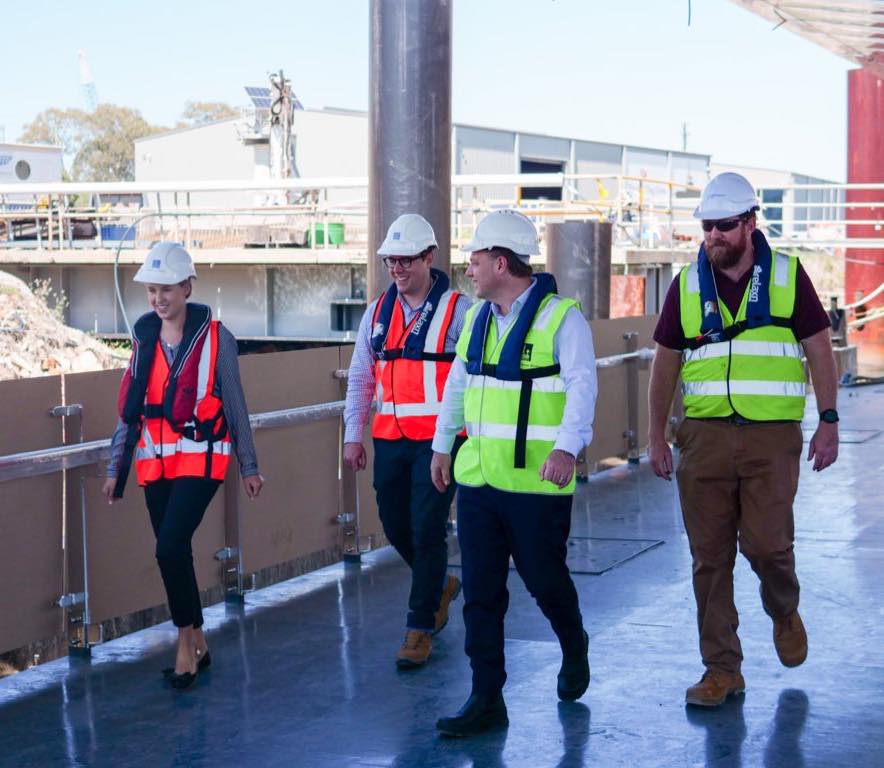 More than 100 local workers from over 30 local suppliers have been involved in the construction of the new Howard Smith Wharves ferry terminal and upgrade of South Bank ferry terminal, with both projects on track for completion by Christmas.

Lord Mayor Adrian Schrinner said the major works for the terminals had been completed locally with the structures of around 200 tonnes each to soon be floated up the Brisbane River and into place.

“These pontoons were built in Brisbane by Brisbane tradies with fabrication in Carole Park and Hemmant, concrete from Kelvin Grove and Sunnybank, signage from Coorparoo and even security services from Moorooka,” Cr Schrinner said.

“This shows we have the expertise and talent right here in Brisbane to deliver these major projects for our residents and visitors to use and enjoy, with more than 100 jobs supported across both terminals.

“The final assembly and launch of each pontoon were completed at The Yard in Hemmant and moved into the river.

“The Howard Smith Wharves pontoon weighs in at 170 tonnes, and South Bank pontoon weighs 210 tonnes, so some impressive equipment was used to move them from the work sheds into the water, including a 600-tonne lift crane.

“They were then towed to the Fitzgerald Yard in Murarrie where work is currently underway to add the roofing, seating, balustrades, plumbing and electrics.

“Once this work is complete, they will be towed upriver and work will start to install them at their respective sites.”

Civic Cabinet Chair for Transport Ryan Murphy said the two pontoons were part of the Schrinner Council’s $53 million investment over the next three years in new and upgraded ferry terminals.

“These modern terminals will make sure Brisbane residents and visitors have accessible public transport options that connect them to the people and places they love,” Cr Murphy said.

“It’s all part of our record spend on transport in the decade leading up to the Brisbane 2032 Olympic and Paralympic Games.”

Both terminals are on track to be completed by the end of 2021. Visit www.brisbane.qld.gov.au for more information.